The map is in process for showing in December 2021 and is developed under the work Concrete Aesthetics.

Zooetics+ at ACT, MIT Program in Art, Culture and Techonology (ACT), School of Architecture and Planning, Massachusetts Institute of Technology), US, 2018

The Sand Bank explores the cross vectors of historical political orders and cultural aesthetics, and is presented here as a component in the doctoral thesis Concrete Aesthetics: From Universal Rights to Financial Post-Democracy. For The Sand Bank Luther has collaborated with choreographer-dancer Ian Berg and musician Jesper Skaaing.

The work is a large-scale scenographic stage with images and forms – morphologies – from different epochs. Moving from modernity to post-democratic society. A stage for Ian Berg and his tap-dance troup Subject:Matter (here Samantha Emmond & Adriana Ogle), who has developed a new scenography for a new sound piece, commissioned from the Danish musician Jesper Skaaing, based on the sound from Sputnik. The scenographic and sculptural elements are also working as instruments for the tap dancers. Like one is the high hat, tapping in sand.

The performance is a part of the recognitions by the Program in Art, Culture and Technology (ACT) of the 50th anniversary of the founding of the Center for Advanced Visual Studies.

Support for the performance and the long research trip - which the work is a part of - has been provided by the Nordic Culture Fund, The Augustinus Foundation, the Novo Nordisk Foundation and the Danish Cultural Council. 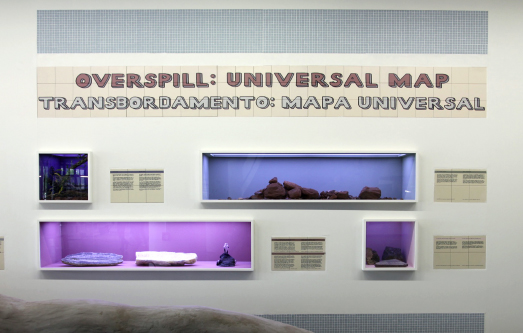 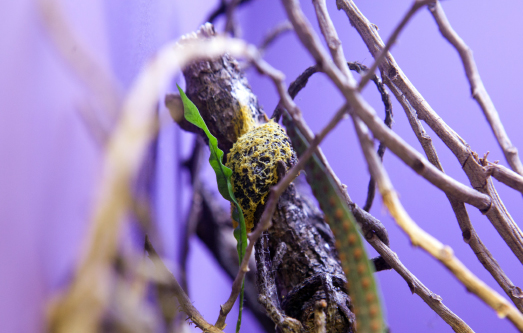 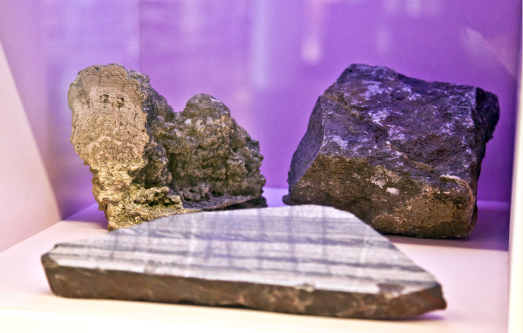 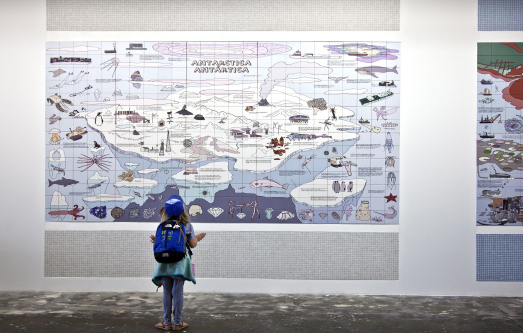 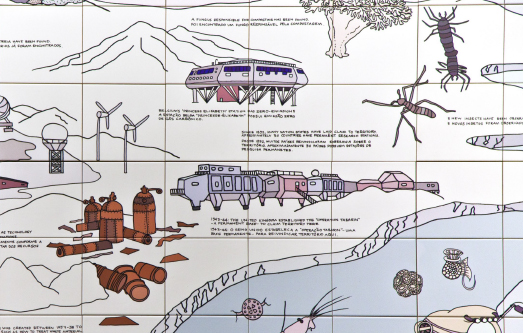 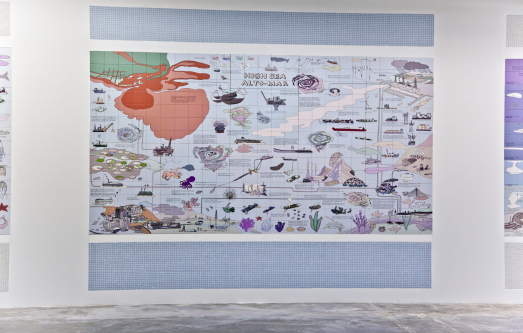 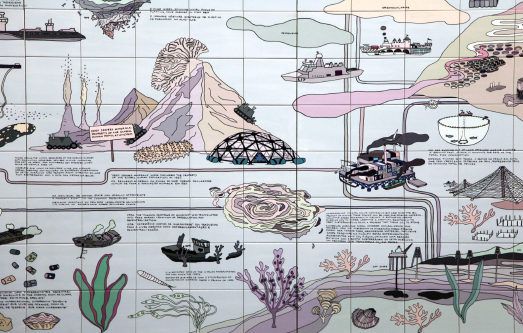 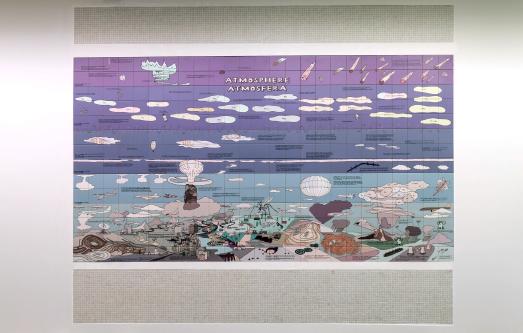 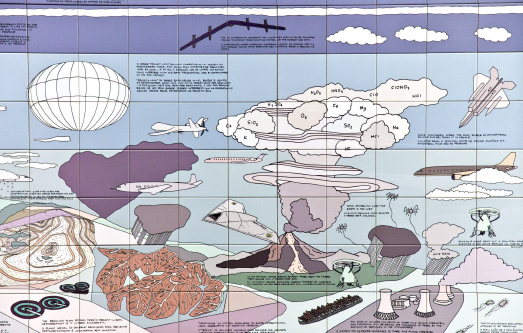 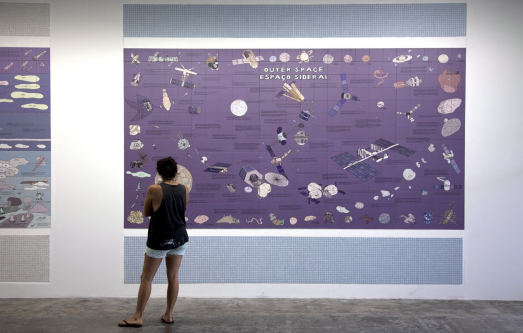 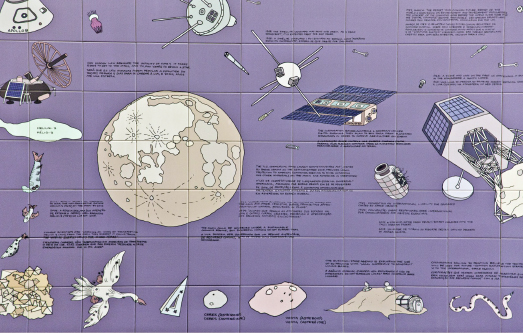 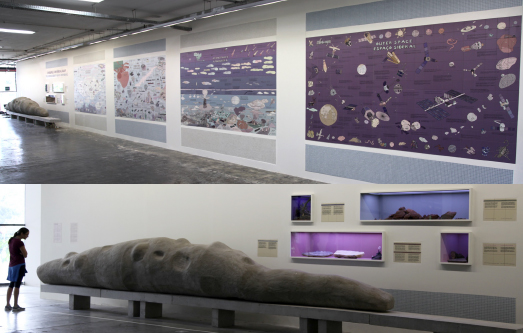 ‘Overspill: Universal Map’ comprises a number of elements placed on a static wall: four large drawings printed on to tiles and fixed to the wall. They map the concept of the Global Commons (a concept that brings together politics and history, multilateral legal agreement, national economic interests, private enterprise, and pollution, chemistry and ecology). A number of objects (toxic mud form the largest mining environmental disaster in Brasil (2015); the first found fossil of a bacterial producing oxygen; fossils extracted from mining for resources producing concrete; oil and Slime Molds) are placed in vitrines built into the wall and a 10m. long bench with a 1:1 scale model of a 8,26m. long prehistoric fungi on top. Each of these elements are accompanied by ‘labels’ which are written in English.

Overall these various parts of the work examine the way we try to understand the nature of the world, especially the intellectual systems we use to define it and the physical effect humans have on the world. That is also, of course, always in some sense a political and ideological issue.

The objects and drawings here layout the borders of a collapsing systems of thinking.

A 8-meter concrete object is modeled on the mushroom-like form of Prototaxites that lived 400 million years ago.

Once there were two distinct ‘Kingdoms’: one of Plants, and one of Animals. But, universal truths can be wrong. We now know that myxomycetes, a sort of fungus, are neither. The old binary code of opposing Kingdoms no longer matches the facts, and science therefore demands that the truth of yesterday be corrected.

With every disrupted scientific certainty, something dies, and something is born. That is true too of history. Except

That twentieth century universalising also gave us the concept of a Global Commons. This political universe was not imagined as a set of interlocking private property rights comprising the territories of a nation state, but as the opposite: a wilderness, a trackless waste, beyond any nation’s guarantee or dominion. Over time, a patchwork of international laws came to mark out the massive dimensions of mankind’s commonality; those places and non-places which could not be captured by war or private ownership – the air, the open seas, the cosmos, and our planet’s last great, unsettled, wilderness: Antarctica.

But, we live in changed times. Political universalism is melting as surely as the Arctic ice sheet. Private investors now tread where their grandparents dared not. New technologies are enabling new kinds of exploitation. For the brave investor, new economic opportunities are opening up unparalleled since the first Europeans settled in the ‘unoccupied’ continent they called ‘the Americas’ – maybe, since they left the Garden of Eden. Happily for them, this new ‘New World’ is unburdened by effective regulation, income tax or civilisation. In this new ‘state of nature’, culture, profit and the individual, can be free. In the absence of any Leviathan, what Thomas Hobbes called ‘the war of all against all’ can be re-fought, and a ‘new Jerusalem’ created in the un-governable heavens to better the one built here on God’s “green and pleasant land”.

And, just as all solid laws are melting into air, the once solid ‘Kingdoms’ of Plants and Animals are revealed as the outdated constructions of a particular place and time. Just like the fleshy bodies of Linnaeus, and Adam Smith, and Karl Marx, all human ideas must wither and dry; just as the ineffable mushroom clouds turned to rain; and the enormous mushrooms of pre-history to stone. In our time of warming, slippery air must melt into space, and space, and space, and space …

The Sand Bank - costumes for the tap dancers, is referring to Colin Crouch’s image description of Post-Democracy. The first images is from economy theory image-production and the last is refering to the Bauhaus and that historical era.

Parts of the work The Sand Bank was exhibited at the exhibition Rivers of Emotion, Bodies of Ore (focusing on extracionism) with the maps from the work Overspill: Universial Map. The focuc is on the High Seas and Sea Bed and the on-going transformation of the chemical process.

The maps from The Sand Bank are here extended with polymetalic sea bed noudles from Deep Sea Mining (an area of specialization in which the Norwegian University of Science and Technology NTNU, located in Trondheim, is world leading), the new text: The Common Heritage of Mankind. The ‘knitted’ text is based on the largest undercover CIA mission ever. The ‘set-up’ in the Cold War is now turning into reality, after the 2008 crices where the speculative economy got a focus on extractionism. The large CIA ship is now used as it performed in the 60ties - as a deep sea extraction tool. Together, the two works visualize the borders of a collapsing system of thinking, where the frontiers of extractive exploitation are continually expanding. 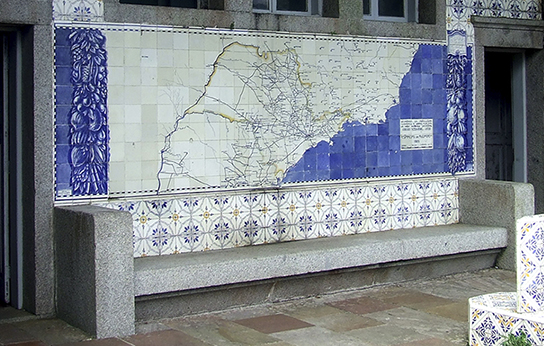 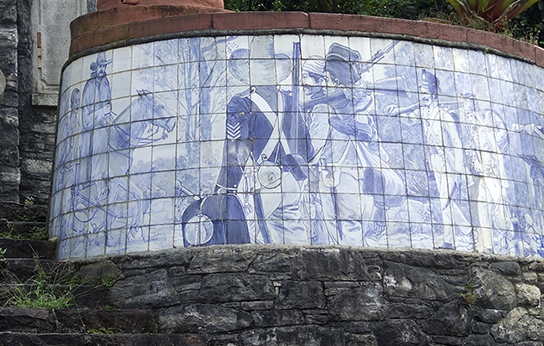 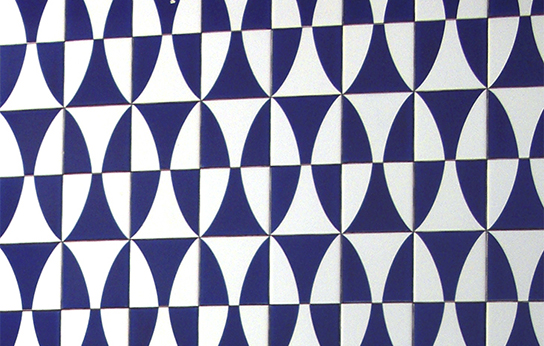 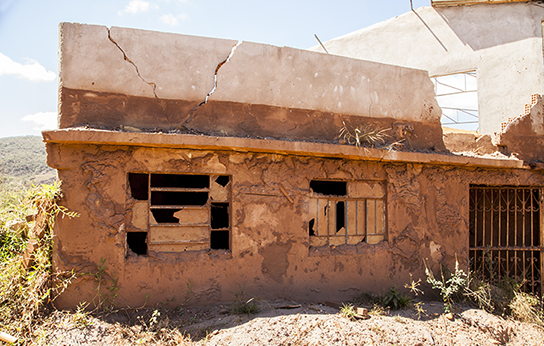 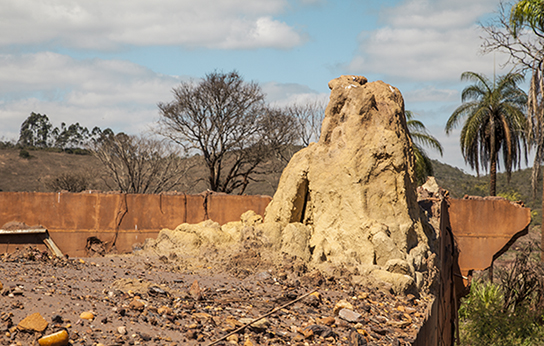 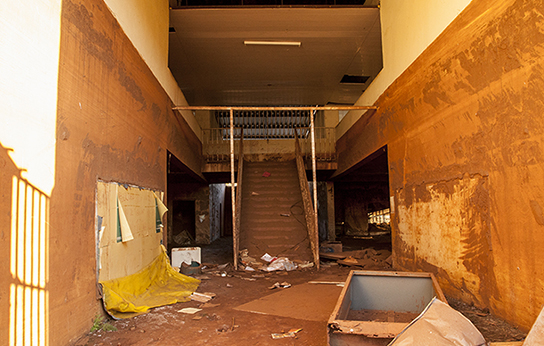 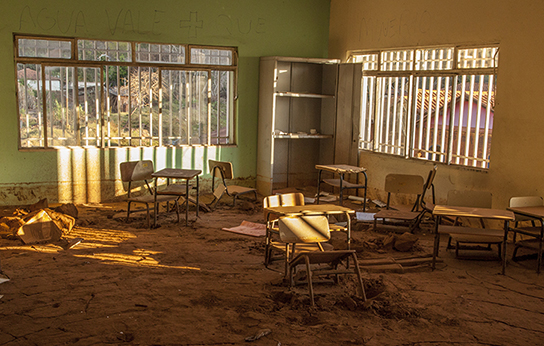 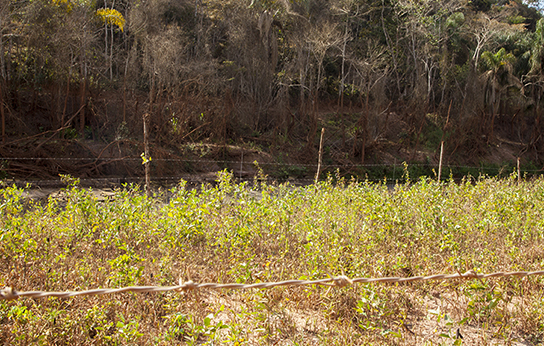 For the 'Overspill: Universal Map' different research was carried out. Intensive research on the Global Commons, including UN reports, the history, human activity in these areas  - mainly after WWII - and the consequences on non-humans. Several research trips were done. They included a visits to the closed zone around Bento Rodrigue and its surrounding, visits to areas with historical ruins of the colonialization, architecture of the International Style movement in Brazil, forests and parks with Slime Molds, universities and museums of geology and a home depot for finding the right tails.

The ‘Samarco leak’ of November 2015 caused 60 million tons of mining waste, containing mercury, iron, aluminum, manganese and arsenic to be released into the river Doce in Brazil, devastating large areas. 17 people died and many were injured. More will probably die over time from problems relating to their injuries. Pollution caused by the leak will make additional problems.

Because the spillage is lighter than water, it moved onto the ocean and created a shadow (hardly nothing changed in the period from November 2015 to April 2017, when I last observed it) that prevents life giving light reaching marine plants. After the death of many aquatic organisms, Samarco was forced to hire local fishermen in affected areas to collect toxic fish from beaches and river banks and bury them.

The images above includes the second floor in the school in the Paracatu de Baixo District; dwellings in Bento Rodrigues, ten minutes away from the mud resources. The zone is now a closed zone, for the public. A colony of ants have built a new habitat of toxic mud on top of a former school. Plants has been planted by the mining company Samarco. A coverup from one perspective, a clean up from another.

Thanks to the people who helped to realize the trip.