Rikke Luther's current work explores the new interrelations created by environmental crisis as they relate to Earth System. Those relation compass themes related to landscape, language, politics, financialisation, law, biology, and economy, that expressed in drawn images, photography and film, which can then be investigated in pedagogical situations.

Luther’s work has been presented in Biennales and Triennales [such as Venice, Singapore, Echigo-Tsumari, Auckland, Göteborg and Sao Paulo]; museums [such as Moderna Museum, Kunsthaus Bregenz, The New Museum, Museo Tamayo, Smart Museum]; exhibitions [such as Beyond Green: Towards a Sustainable Art, 48C Public.Art.Ecology, Über Lebenskunst and Weather Report: Art & Climate Change]: as well as film festivals [such as CPH:DOX* – Copenhagen International Documentary Film Festival and the Perth International Film Festival].

Since the 32nd Bienal de São Paulo in 2016, Luther has been working solo. Prior to that, she worked exclusively in collectives, co-founding Learning Site (active 2004 to 2015) and N55 (active with original members 1996 to 2003). She defended the PhD Concrete Aesthetics: From Universal Rights to Financial Post-Democracy in 2021. It will be published in 2023 with extended texts by Esther Leslie and Jaime Stapleton.

Luther has held teaching positions in Denmark, and given numerous guest lectures around the world. She is currently GRASS Fellow at the GRASS Fellow Programme, Uppsala Universitet / Campus Gotland and Baltic Art Center 2022-2024. She is currently conducting field studies for a new research project: More Mud, outputs of which are due in 2024. The project is commissioned by the Art Hub and Nordic Alliance of Artists’ Residencies on Climate Action (NAARCA). More Mud is part of Luther’s postdoctoral research The Ocean-Lands: Mud Within the Earth System, which is based at Queen Margrethe’s and Vigdís Finnbogadóttir´s Interdisciplinary Research Centre on Ocean, Climate, and Society (ROCS) and at The GLOBE Institute / Danish Natural History Museum / Center for Macroecology, Evolution and Climate. 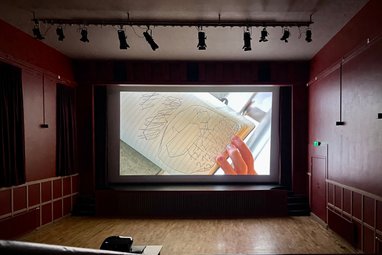 Screening in relation to the exhibition On Moving Ground - Sand, Mud and Planetary Change, Iceland, 2022.

The sound recorder takes a break to explain the surface decoration built into the form of the Kyoto Congress Centre. The decoration represents the repeating patterns of human dialogue, which draw together and separate in a continuous flow. (27:14 sec.)

Past:
- Exhibition, 2022: On Moving Ground - Sand, Mud And Planetary Change, Skaftfell, Seydisfjörd, Iceland [NARCA]
- Public project, 2021: For the Future, Viborg municipality, Denmark [Ceramic tiles, ceramics and a support wall as a part of a new infrastructure project]
- VR & AR - educational material made for young students, 2021: The material is based on the Global Commons and the Spaceframe Complex, Kunsthal Aarhus. Co-
produced with Khora and Kunsthal Aarhus. 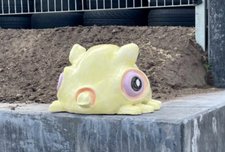 'Concrete Nature' explores the political history of concrete and the social structures it embodies. Rikke Luther’s dialogue weaves a broad range of research material into a narrative of personal exploration. Her film draws out the cultural threads that lay between critical moments of modernity; from concrete’s ‘discovery’ in the first decades of the 19th century, through ideological hopes of Modernists, into our era of sand scarcity, and investor’s hopes for a future, post-apocalyptic, 3D-printed concrete society in space.

The film was shot around in and around the MIT campus, Cambridge, Boston, New York, Hudson River, High Fall, London, and includes historical images. The film explores concrete buildings that were politicized before they were constructed, before an architect lent them their particular voice; buildings whose political speech is now being overwritten, rewritten, and erased, by the shifting stands of ideology and environment.

- Tapdance show: The Sand Bank, MIT Program in Art, Culture and Technology, MA, US - a part of the 50 Year Celebration of ACT, spring 2018

Certainty lives in a state of continual reformation. Human apprehension is as temporal and provisional as the environment that sustains it. The intellectual systems through which humans apprehend and the environment have their own life-cycles. Life divided by the simple binary plant and animal did not survive the 20th century. The borders of nations, seemingly fixed a hundred years ago, similarly proved themselves to be contingent and temporal. Continental shelves creep. Ice melts. Political and economic fortunes fluctuate. Thinking collapses, just when we think we got it.

‘Overspill: A Universal Map’ comprises a number of separate elements. Four large drawings printed on ceramic tiles map the Global Commons; a concept that negotiates the facts of history, political ideology, law and ecology as they are modulated by the limits of legal arguments and enforcement, national self-interests, global corporate power, and the economic and environmental ‘overspill effects’ of pollution on planetary chemistry and climate. This two-dimensional element is contrasted by a wall of in-built vitrines, housing a number of natural artifacts. Here toxic mud form the 2015 environmental disaster in Brazil rubs shoulders with slime molds, recent concrete ‘techno-fossils’, and an important historic fossil of the first bacteria to produce oxygen on the earth. In the foreground lays, a 1:1 scale model of an 8.26 m prehistoric fungi on a concrete bench. Each of these elements is accompanied by explanatory and commentary ‘labels’, written in English and Portuguese.